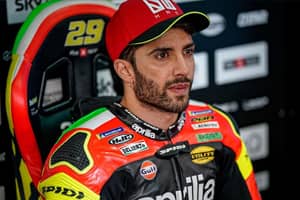 An Italian rider born on 9th August 1989 in Adriatic coastal town of Vasto. Like all other riders, his interest in motorbikes came at a very early age. Iannone started his career on pocket bikes and soon became a championship front-runner. He participated in both the Italian and Spanish championships before moving to the class of World Championship in 2005.

His career start was not good. He won his first race on 4th of May 2008 at Chinese Grand Prix in Shanghai, then he won 3 more races in 2009 season and proved himself as a championship contender. He moves to the moto2 world championship and holds the 3rd position in overall standings in all the three seasons from 2010 to 2012.

After success in Moto2, he moves to MotoGP world championship with Ducati and competes with it till 2016. In 2017 and 2018 he participates with Suzuki Ecstar team. and last last year he moves on with Aprilia racing team! 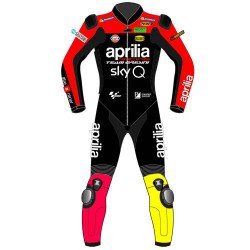 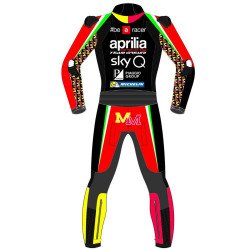 New
Brand: aprilia Model: DI-1144
MotoGP 2019 Andrea Lannone Aprilia Race Suit
ANDREA IANNONE APRILIA MOTOGP 2019 LEATHER SUIT SAFETY FEATURESAndrea Iannone suit is made of selected top grain leather that is especially processed and drum dyed for excellent abrasion resistance and durability.Internal protection on shoulder, elbow and knee are CE approved.Additional layer of lea..
$249.00
Ex Tax:$249.00
Add to Cart
Add to Wish List Compare this Product
Buy Now For Bulk Price
Showing 1 to 1 of 1 (1 Pages)
Notification Module
This is the sticky Notification module. You can use it for any sticky messages such as cookie notices or special promotions, etc.